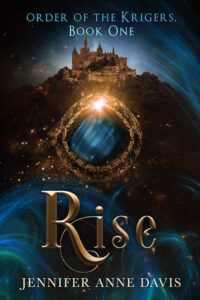 RISE (Order of the Krigers, Book 1)

The people of Nelebek live in fear of persecution from the evil Morlet, who reigns with a dark and destructive magic. The kingdom’s only hope lies with the Order of the Krigers—twelve warriors with mysterious powers linked to magical weapons.

For over a century, Morlet has been annihilating the Order, picking them off one by one. Eleven Krigers have been hunted down, tortured, and imprisoned in his dungeon. Now only one remains.

Sixteen-year-old Kaia survives by keeping her head down and minding her own business. But when she finds herself in the middle of a public execution where the mysterious Morlet is in attendance, an odd compulsion she can’t resist comes over her when she looks into Morlet’s eyes. Soon, an ancient power awakens, and Kaia can’t blend into the scenery anymore. Will she heed the call of the Krigers or will Morlet’s dark magic destroy the last of the Order? 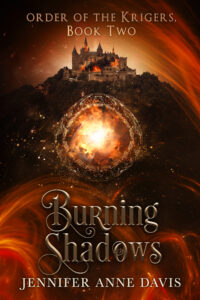 The Order of the Krigers has risen.

Determined to destroy the Order, the vicious king, Morlet, scours the land, searching for the Krigers. He burns entire villages, hoping to flush out the twelve chosen ones.

He has other plans for Kaia.

In order to end the curse, Kaia must conceive a child before the Krigers can kill Morlet. However, she doesn’t know if the father is supposed to be her fiancé, Vidar, or his brother, the evil king. In order to find the answer, she journeys to the other side of the mountains with Anders. Stifling her growing feelings for the assassin, Kaia unearths secrets that force her to reevaluate her cause. Can she sacrifice so much of herself to save the kingdom of Nelebek? Can she kill Morlet when she is starting to understand and even sympathize with him? And is there really any choice at all, especially when it comes to matters of the heart?

Kaia learns each choice comes with a price, passion can rival hatred, and an evil looms on the horizon, more sinister than she ever imagined. 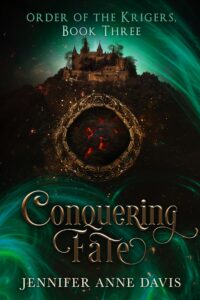 With no choice but to face her destiny straight on, Kaia is determined to end the curse–no matter the personal cost. Sacrificing her own wants and desires, she turns herself over to the evil king, Morlet. Together, they seek to discover the catalyst for the events that started it all over a hundred years ago.

The path she embarks on tests her skills, her willpower, and her heart. Facing the darkest truth inside of her, she makes a choice that not only has unspeakable consequences, but also changes her life and the future of the kingdom forever.

This is the stunning conclusion to the Order of the Krigers series.