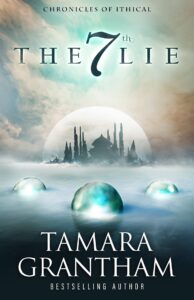 Agent Sabine Harper is thrilled to receive her first mission—until she learns what it is. Turns out, all she has to do is save the world from certain destruction. And she has two weeks to do it.

Sabine survives her grueling training by the Vortech Agency, but for her first mission, she must protect the world from a devastating solar flare by finding seven energy stones called cerecite. If she refuses, they’ll terminate her father’s life-sustaining cancer treatments.

Sabine is transported to an isolated, advanced civilization hidden beneath a dome in the Bering Sea. While she searches for the cerecite, she assumes the identity of the invalid prince’s caretaker. In time, she finds herself attracted to the prince. But she is perplexed by this strange island’s many mysteries. The air smells mechanical. Every blade of grass is identical. And the island’s dimensions are bigger than they should be. Sabine realizes what Vortech told her may not be true. She may not even know where she really is…

Sabine soon realizes that someone doesn’t want her to leave—and it’s possible they know her true identity. Unless she finds a way home with the cerecite, her father will perish, the world will die—and she’ll die with it.

Tamara Grantham is the successful author of more than a dozen books. She’s won numerous awards, such as a first place Rone award, and first place in Foreword Review’s Book of the Year awards. Many of her books are #1 bestsellers on both Amazon and Barnes & Noble, and they have obtained more than three-hundred five-star reviews. She has a BA in English, and she’s been a featured speaker at numerous writing conferences and comic cons.

Born and raised in Texas, Tamara now lives with her husband and five children in Wichita, Kansas. She rarely has any free time, but when the stars align and she gets a moment to relax, she enjoys reading fantasy novels and watching every Star Wars or Star Trek movie ever made.